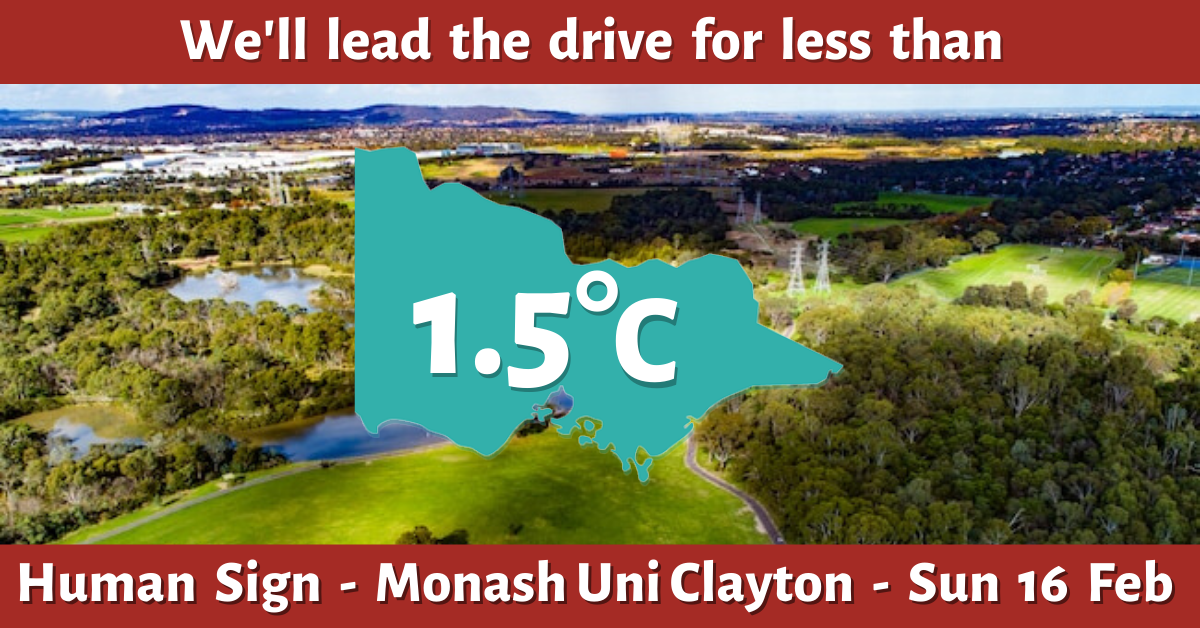 Want to kick off 2020 with a powerful message for climate action that can't be ignored?
Then join us for a human sign at the Monash University Clayton soccer pitch in the south-eastern suburbs of Melbourne!
Momentum is building at the community level for Victoria to lead on climate.
With PM Scott Morrison govt refusing to tackle the climate crisis, we need Premier Dan Andrews to show greater leadership.
The Victorian Labor govt will soon set Emissions Reduction Targets for the years 2025 and '30. It's the first time a state government will set short- and medium-term targets across the whole economy.
With climate impacts occurring much faster than scientists predicted, the litmus test is whether the targets help keep global warming below 1.5°C.
In 2019, we made the case for science-based targets in dozens of meetings with Labor MPs, hundreds of submissions, and creative actions...
Will you join us for a human sign to kick off the campaigning year in style?
This event will take place on the lands of the Woi Wurrung People of the Kulin Nations. We acknowledge this land was stolen, and that sovereignty was never ceded.
WHEN
February 16, 2020 at 10:30am
WHERE
Monash University Clayton soccer pitch
Wellington Road
Clayton, VIC 3800
Australia
Google map and directions

Week of action: Will Labor lead on climate?

It has been an epic year. We've been supporting communities on the frontline of climate impacts; putting climate blockers such on the backfoot; boosting the climate movement in all its forms; and meeting with as many Victorian Labor politicians as possible...

Because Premier Dan Andrews and the Labor government will soon set Emissions Reduction Targets for 2025 and '30.

It's the first time a state government will set short- and medium-term targets across the whole economy. And, given PM Scott Morrison's refusal to tackle the climate crisis, it's an opportunity that we can't miss.

With climate impacts occurring much faster that predicted, the litmus test for the Andrews government is whether the Emissions Reduction Targets help keep global warming below 1.5°C.

Science-based targets will continue Victoria's renewable energy rollout and put the state on the map for the jobs-rich offshore wind industry. It will require greater investment in public transport and greater protection for forests and the natural world.

While we've urged well over a dozen MPs to lead the drive for less than 1.5°C, we need your help to reach the rest of them.

Grandmother for Climate Action calls for Vic Labor to lead

The Andrews government has an opportunity to put Australia back on track by setting Emissions Reduction Targets that help keep global warming below 1.5°C.

Libby Capogreco, a member of the Grandmothers for Climate Action, met with her local MP Anthony Carbines to make the case for ambition: